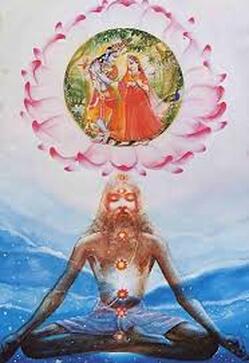 The Perfection of Yoga

Bhakti-yoga is considered the highest form of yoga, because it is the easiest and most direct way to connect with the Supreme. In the 6. Chapter of Bhagavad-gita, Krishna explains to Arjuna the classic yoga-system which involves sitting postures, pranayama (breath control) and meditation with the final goal to achieve full absorption (samadhi) in the Supreme Person.
Because these practices are quite demanding, Arjuna tells Krishna that he is not able to apply this kind of yoga in his life. The main reason, he says, is that the mind is restless, turbulent, obstinate and very strong, and to subdue it, is more difficult than controlling the wind.
If this was true 5.000 years ago, what can be said about the conditions we face today? A disturbed mind, symptoms of which are anxiety and stress, is affecting people of every section of human society, so much so that the The World Health Organization said stress has become a ‘World Wide Epidemic’.
Many people attend yoga classes to find peace of mind. Although there is nothing wrong with reducing stress and become more equipoised, peace of mind is not the ultimate goal of life. The ultimate goal is to steep the mind in pure love of God which will then flood our whole being with unlimited and unending spiritual bliss.
Krishna tells Arjuna therefore at the end of the Sixth Chapter:
And of all yogis, the one with great faith who always abides in Me, thinks of Me within himself, and renders transcendental loving service to Me -- he is the most intimately united with Me in yoga and is the highest of all. That is My opinion.
Srila Prabhupda explains in the Purport:
The mind is so strong and obstinate that it sometimes overcomes the intelligence, although the mind is supposed to be subservient to the intelligence. For a man in the practical world who has to fight so many opposing elements, it is certainly very difficult to control the mind. Artificially, one may establish a mental equilibrium toward both friend and enemy, but ultimately no worldly man can do so, for this is more difficult than controlling the raging wind. In the Vedic literature (Katha Upanisad 1.3.3-4) it is said:
atmanam rathinam viddhi sariram ratham eva ca
buddhim tu sarathim viddhi manah pragraham eva ca
indriyani hayan ahur visayams tesu gocaran
atmendriya-mano-yuktam bhoktety ahur manisinah
"The individual is the passenger in the car of the material body, and intelligence is the driver. Mind is the driving instrument, and the senses are the horses. The self is thus the enjoyer or sufferer in the association of the mind and senses. So it is understood by great thinkers." Intelligence is supposed to direct the mind, but the mind is so strong and obstinate that it often overcomes even one's own intelligence, as an acute infection may surpass the efficacy of medicine. Such a strong mind is supposed to be controlled by the practice of yoga, but such practice is never practical for a worldly person like Arjuna. And what can we say of modern man? The simile used here is appropriate: one cannot capture the blowing wind. And it is even more difficult to capture the turbulent mind. The easiest way to control the mind, as suggested by Lord Caitanya, is chanting "Hare Krsna," the great mantra for deliverance, in all humility. The method prescribed is sa vai manah krsna-padaravindayoh: one must engage one's mind fully in Krsna. Only then will there remain no other engagements to agitate the mind. (Bhagavad-gita As It Is, 6.34)